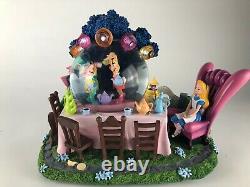 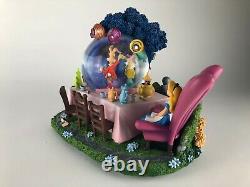 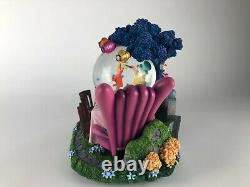 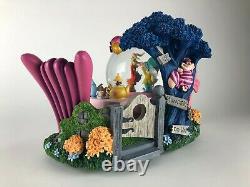 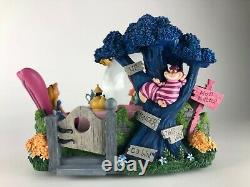 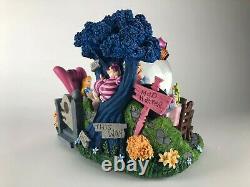 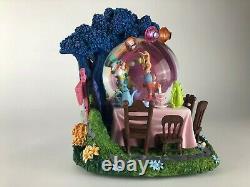 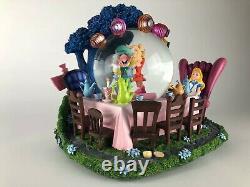 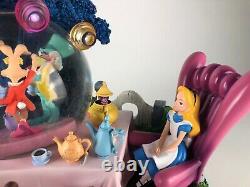 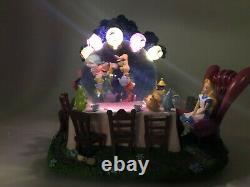 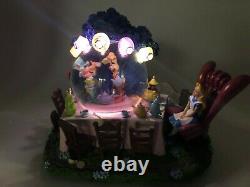 The 13th release of Disney's animated features, the film premiered in London on July 26, 1951, and in New York City on July 28, 1951. The film was nominated for an Academy Award for Best Scoring of a Musical Picture. This sculpture is rendered in high quality, hand-painted resin, and is retired with a limited number of examples in the hands of Disney collectors. This one is new and perfect. Where to even begin describing this piece; theres so much going on with it! Firstly, its a gorgeous sculpture that looks amazing from all angles. Next, the colors are just insanely vibrant, like the movie. But it is indeed also a snow globe. If you shake it up (do so carefully, as its big, heavy, and precious), snow comes gently floating down around the Mad Hatter and the March Hare as they gleefully toast one another while drinking their tea and dancing. But its also a music box! If you wind up the key on the bottom of the piece, it plays one of the best songs from the movie, In the Golden Afternoon.

Insert two AA batteries (included) and turn the switch on the bottom of the piece and the festive lanterns above the globe all light up in different colors. Just when you thought it couldnt get any more elaborate, as the music is playing, the Mad Hatter and March Hare actually dance in a circle within the globe AND the sleepy Dormouse in the teapot outside of the globe lifts the lid of the teapot and peeks out and then retreats again, over and over as the two dance around inside the globe. If it wasnt such a gorgeous and valuable piece, Id love to take it apart and figure out how they were able to make something inside a sealed and wet globe rotate AND something outside the globe move up and down with the same mechanism; its brilliant! I've photographed the piece in two different lighting environments so you can see how different it looks depending how how you display it: 1 Daylight with the pieces lights off 2 Dim ambient light, with the pieces lights on.

The two AA no-name batteries that were included with the piece are long since dead (Ive had this piece in my collection for over 10 years and never opened it until now) so Ive replaced them with two brand new, high capacity, name brand batteries. If you notice any small white dots in the photos, theyre likely just tiny bits of styrofoam from the packaging. This piece comes from my smoke-free, pet-free home. This piece is brand new, in the box, with all original packing materials. The piece was only removed from the box to inspect and photograph it and is in brand new, mint condition.